Ten Things You Should Know About Almonds

Ten Things You Should Know About Almonds 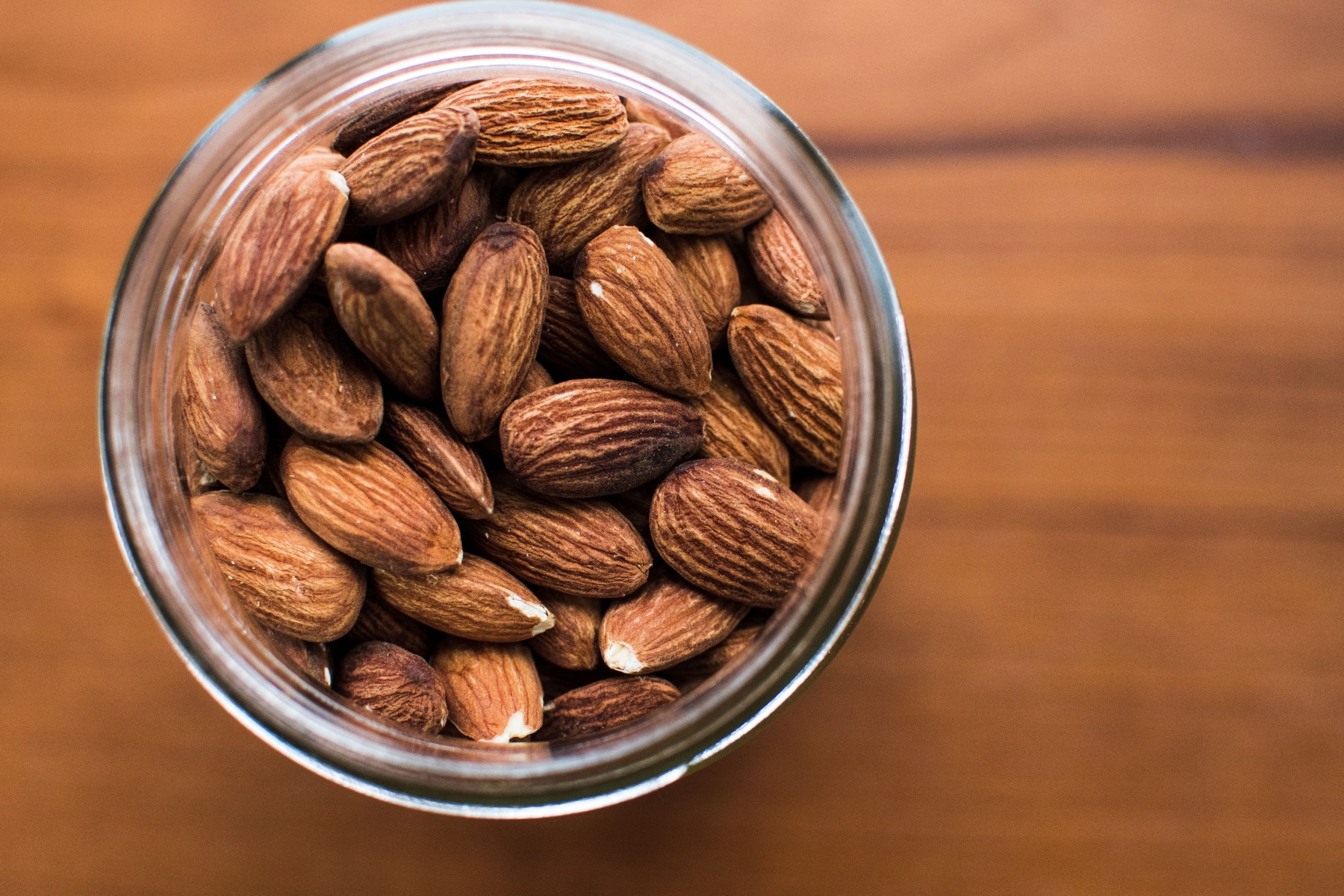 Photo by Remi Yuan on Unsplash

It is that reach-for-even-more almonds time. Whether it’s the cake, the mince pies, the nut roast, the marzipan, the apricot and almond stuffing or just the gentle crunch of a nut by the fire almonds have had a special place in our Christmas celebrations. But they have a special place in cultures across the world too and in the last twenty years have found a massive new market inspired partly by demand for non-dairy milk and by the surge in plant-based eating. The global market for almonds has boomed by a third in the past decade and is officially expected to continue to grow by up to 10 per cent per year.

Almonds are one of the richest food sources of Vitamin E the key antioxidant that protects us from free radicals, incomplete molecules that are the result of chemical processes in the body and which are linked to a major diseases and the ageing process. Because it is fat soluble Vitamin E can offer protection from free radical damage to the fats that coat every cell in the body. It is also linked with maintaining healthy skin, eyes and strengthening the immune system. It may also prevent cholesterol being oxidised and causing hardening of the arteries. As many as 20 other antioxidants, known as flavonoids, exist in the dark brown skin of an almond. They include catechins, as found in green tea.

Almost a third of every almond consists of monounsaturated fat the “good” variety that is also found in olive oil and is linked to improved heart health because of its impact on fighting “bad” LDL cholesterol levels in the blood. Major research projects have shown that regular nut eating dramatically reduces the risk of heart disease and stroke as well as early death from any cause. Despite being rich in fat eating nuts have also been shown to aid weight loss. This may be because high levels of protein and unsaturated fats are linked to the release of hormones that control appetite.

While they are over 20 per cent protein and 12 per cent fibre almonds are also rich in the minerals. A small handful of nuts (around 25g) contains around a quarter of your daily need for copper and manganese and around 15 per cent of your magnesium and phosphorous. Copper helps create red and white blood cells and the haemoglobin that carries oxygen around the body. Manganese is important for the creation of enzymes in the body. Magnesium is involved in over 300 chemical reactions in the body and phosphorous is vital for bones and teeth. Almonds also have calcium, iron and potassium.

A range of energy creating B vitamins are delivered by almonds including B1 (thiamine), B2 (riboflavin), B3 (Niacin), Pantothenic Acid (B5), B6 and Folate (B9). Among a range of important functions most play an important role in the production of energy from the food we eat. But they are all water soluble and are consequently, not stored in the body. They therefore need to be eaten on a regular basis. A handful of almonds has so much B2 that it delivers more than a quarter of our daily need. As well as energy production B2 is also important for the nervous system and keeping skin and eyes healthy.

Our taste for almond milk has led to a huge boom in sales over the past five years. A third of young people in the UK are now said to have turned their backs on dairy milk. But it is not the first time that the plant-based alternative to dairy has been a big hit. Five hundred years ago European Christians faced a ban on eating animals’ products on at least two days a week. Details of making almond milk travelled along the trade routes from the Middle East and became a big hit... at least among the rich. Ground almonds were mixed with rose water, honey and even white wine and was even thickened to make cream or curds. Almond milk featured in many Medieval cookbooks and continued to do so even after the strict fasting rules were abandoned.

The almond may be the first fruit tree to be cultivated. A native of Asia it moved first to Greece and from there it was brought to Western Europe by the Romans. In the mid-1800s trees were taken to America by Spanish monks but attempts to grow them in Southern states were hit by early frosts. It was another hundred years before plantings in the warmth of California saw the birth of a massive farming industry now covering over a million acres and still growing fast. The US is by far the world’s biggest producer with harvests now reaching two million tons. Spain is number two on the list with a harvest of just 350,000 tons.

For centuries almonds have had religious and social significance. The Romans scattered them before newly married couples as a fertility charm. Almonds, sometimes sugared, are still a feature of weddings in Italy, Greece and the US. In the book of Numbers in the Old Testament they become a symbol of Divine approval when God transformed a staff belonging to Aaron. “And behold the rod of Aaron was budded and brought forth buds and bloomed blossoms and yielded almonds.’’ When King Tutankhamun was placed in his tomb almonds were among the foods left beside him, to sustain him in another place.

Every spring a million beehives are transported across the US into California to pollinate the almond blossom. Botanically an almond is not a nut but a drupe, the seed of the almond fruit which is closely related to the peach. But the almond fruit is not in the same league as its cousin. It begins life as a fleshy green covering for the seed but as the season progresses it dries and splits open allowing the seed/nut to dry. Machines then shake the harvest from the trees and the shell of the dried fruit is separated from the seed/nut and used for animal feed.

When it comes to international dining you will find almonds in tagine dishes from Morocco, curries in India, biscuits in Italy and cookies in America. In Britain they have a key role in a list of traditional recipes like Bakewell Tart but are most visible in and on the Dundee Cake. Legend has it that the cake was first created in Scotland because Mary Queen of Scots did not like cherries which were a regular feature of fruit cakes in her day. A new recipe was conjured up replacing cherries with almonds and this was first commercially produced by marmalade makers Killers of Dundee in the 1800s. 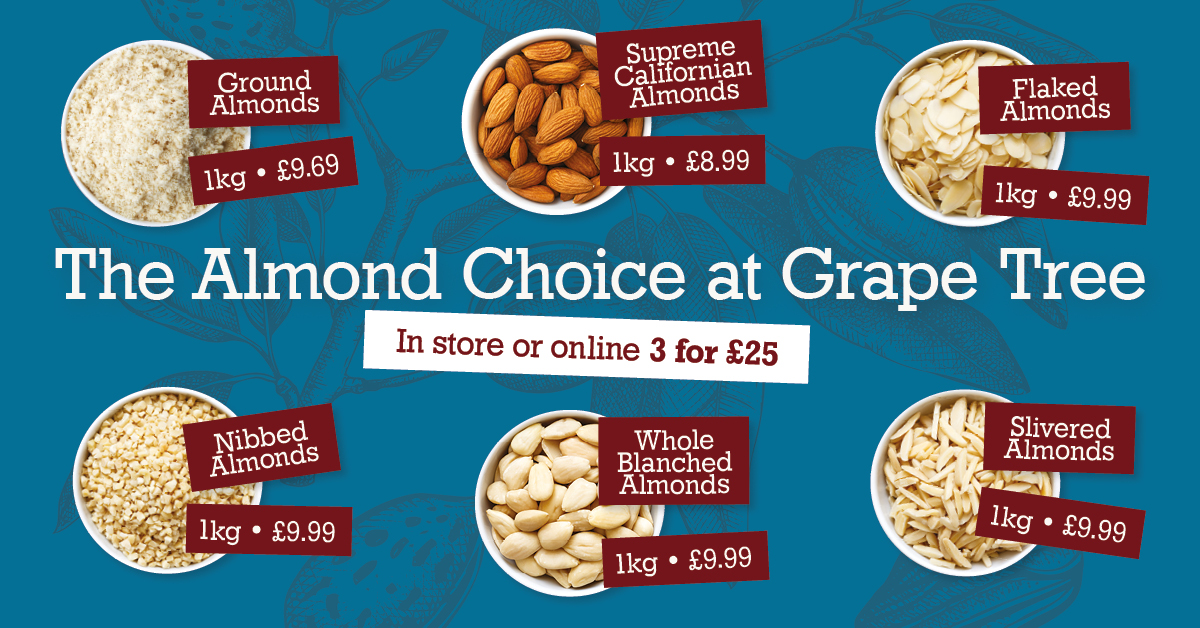