Will Prunes Land On Mars?

Will Prunes Land On Mars? 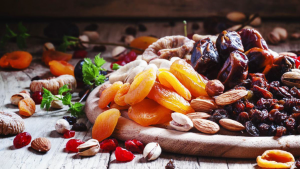 In the looming technological battle to land humans on Mars there is one extraordinary ingredient... prunes.

The reason is that one of the major hazards faced by space travellers is bone loss. And research in America is repeatedly demonstrating that the consumption of prunes can prevent or reverse the process.

Astronauts on long term missions face losing up to ten per cent of their bone density every six months or so because of a combination of weightlessness and cosmic radiation.

As a consequence, at the US space centre, NASA, prunes are a regular item on the menu. US research has already demonstrated that eating large quantities of prunes can protect the bones of mice from radiation damage.

And research at the Florida State University involving postmenopausal women found that those who eat five or six prunes a day along with calcium and Vitamin D supplements showed bone density increases of over 10 per cent in a year.

On earth we all face bone weakening with age and the menopause poses a particular osteoporosis threat to women.

The National Osteoporosis Society estimates that there are over 3 million sufferers from the condition in the UK. It says one in two women and one in five men over 50 will break a bone as a result.

Prunes contain a string of nutrients that are associated with bone health including potassium, magnesium, Vitamin K, boron and antioxidants.

But scientists are still working to identify which of these is the key to the effects shown in the research. And for those involved in the space programme time is critical.

In 2020 the red planet becomes aligned with earth and will therefore be easier to reach. The Americans, the Chinese and others are all making plans to send landing craft. A manned landing is expected in the 2030s. A journey to Mars can take up to six months and crews would expect to stay on the planet for two years. That means a total of three years in reduced gravity and facing radiation.

If scientists cannot identify the specific nutrients that can protect the human skeleton then it looks like prunes in one form or another will be heading for Mars.