Ten things you should know about Prunes

Ten things you should know about Prunes 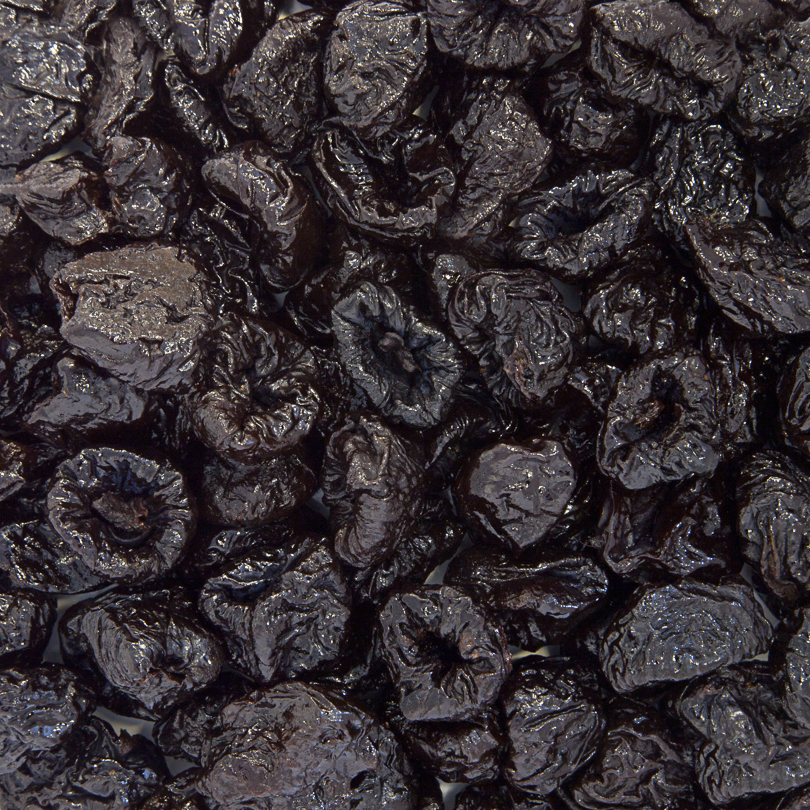 Prunes are not what they used to be. At least not from an image point of view. Once an unappealing product associated with curing digestive issues they are now becoming recognised as a nutritious dried fruit with a flavour – and sweetness – deserving of a place in healthier mealtimes and elegant recipes. At the start of the century the California prune industry persuaded the American Food and Drug Administration to allow the use of the alternative name “dried plums” in order to escape the old prune associations.

Plums appear to have been enjoyed by mankind since the Neolithic age and by the time of the ancient Greeks the technique for drying them to make prunes was already established. Prunes became an ideal food source for use after a poor harvest or on long journeys. Trees were brought back to Western Europe by returning Crusaders. It takes around 10 years for a modern prune plum tree to reach maximum production of around 300 lbs of fruit. Mechanically shaken from the tree and caught in a canvas container the weight of the crop is reduced by two thirds in the drying kilns.

In 1850 Louis Pellier brought French plums into California and grafted them with local, wild varieties. The industry that began during the gold rush boomed itself and the orchards eventually stretched over 170,000 acres. The state now has 46,000 acres of plum trees for producing prunes and packs up 40 per cent of the world’s prune supply. One of the key areas for prune production, the Santa Clara Valley, has now become Silicon Valley, centre of the US high-tech revolution. The world’s biggest producer of plums is China with a staggering 6 million tonnes a year.

Varieties of plum, all under the scientific label Prunus Domestica, run into thousands. Prunes are produced from the “freestone” types in which the pit separates easily from the flesh. The most famous prune in theworld is the Pruneaux D’Agen, grown in south west France around the towns of Agen and Villeneuve-Sur-Lot. Celebrated for its flavour and moistness it is produced from a variety of plum called Le Prunier d’Ente which has been grown in the area since the 12th century.

Prunes are a first class source of Vitamin C and are also noted for Vitamin K, copper and potassium. They also have important levels of soluble fibre and antioxidants. The Vitamin C helps protect cells and maintains healthy connective tissue but in prunes may also help increase the absorption of iron into the body. Vitamin K has a key role in the blood clotting process. Potassium is an electrolyte that helps keeps the nervous system in order. Copper helps make red blood cells and keep the immune system healthy.

In 2010 the European Food Safety Authority ruled that prunes could not be legally described as a laxative. Two years later is changed its mind ruling that consuming 100 grams of prunes a day does maintain bowel function. While fibre content is part of the reason for this a second explanation is that prunes contain a high level of sorbitol, a type of carbohydrate that is widely used in the food industry as a sweetener. But it also has the ability to draw moisture into the colon and thus keep the digestive system on the move.

One prune contains well over a gram of fibre, a thirtieth of your daily requirement. This is important given that most of us have a diet woefully short of fibre. We should consume 30 grams a day and we average just 18 grams. Eating sufficient fibre can reduce the risk of heart attack as well as protecting against stroke. Prunes contain both insoluble fibre, the one that helps digestion, and insoluble fibre which can help lower cholesterol levels and slows down the rate of absorption of glucose, stabilising blood sugar levels.

Prunes are ranked as leading food for anti-oxidants. They contain two phenols called neochlorogenic and chlorogenic acid which are particularly effective at neutralising oxygen based free radicals which offer a threat to cell membranes and brain cells. A one hundred gram serving of prunes contains the body’s daily requirement for boron, a vital element of bone health. US research has suggested that eating prunes may help postmenopausal women reverse the effects of osteoporosis.

The health benefits and great taste of prunes have now seen them invade every meal of the day. Search for prune recipes on line and you will get over half a million options. You can start the day with a prune smoothie or even a prune pancake and then look forward to a lunchtime treat of pumpkin soup with prunes or a gorgonzola mousse with prunes or even a vegetable couscous – with prunes of course. And that’s not to forget your prune based oatmeal bar as a mid-afternoon snack.

Every celebrity chef now has a selection of prune delights in their recipe catalogue. Rick Stein has pot roasted beef with red wine and prunes. Jamie Oliver has a chocolate mousse with prunes as well as a Moroccan lamb tagine with prunes. Mary Berry serves roast fillets of pork with prunes and apple and Raymond Blanc also favours prunes with his pork. And then there is Heston Blumenthal’s famous Christmas cake for Waitrose, a sixth of which consists of prunes.

Discover our range of prunes here