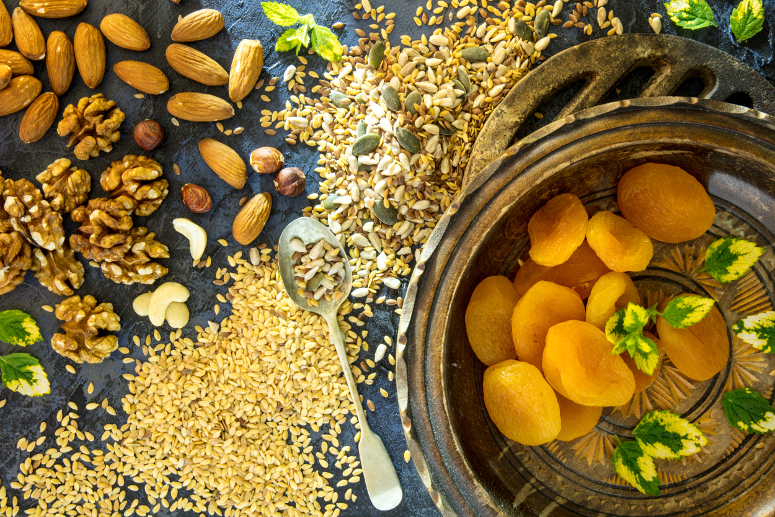 What were the foods that gave the last year its special flavour? Based on your choices at Grape Tree this is our chart of your plant-based top ten. With a few reasons why, you might have bought them.

These tiny seeds from the Andes are mighty powerhouses of nutrition. A one-ounce serving (2 tablespoons) has 10 per cent of your protein requirement for the day as well as being rich in Omega 3 fatty acid. Those two tablespoons contain a third of your daily fibre target as well as almost a third of your need for manganese, magnesium and phosphorous. Then there is calcium and iron. Chia may also help your rest. It comes with high levels of tryptophan which when converted in the body to serotonin affects mood, appetite and sleep.

The NHS recommends walnuts as a source of ALA, the plant-based Omega 3 fatty acid which is linked to the health of the heart, the brain and the eyes as well as combating type 2 diabetes, arthritis and osteoporosis. Walnuts also have a whole array of B vitamins (B1, B2, B6, B7 and folic acid) as well as a special form of the antioxidant Vitamin E. A portion of walnuts (around a handful) has more than half your daily need for copper as well as iron, zinc, manganese and magnesium.

A handful of almonds gives you over a tenth of your daily protein requirement, a third of your Vitamin E and a quarter of your magnesium. Rich in the monounsaturated fats that help lower “bad” LDL cholesterol almonds share the extraordinary ability of nuts to protect our health. Actually, botanists insist almonds are the seed of a fruit related to cherries. Whatever their botany they are also rich in copper, manganese and phosphorous. And the skin on an almond has twenty flavonoids which act as antioxidants in the body.

A top source of unsaturated fats (including alpha linoleic acid) to help reduce cholesterol levels and fight cardiovascular disease. A portion of these seeds will give you a fifth of your protein for the day as well as important levels of copper, magnesium and phosphorous. Substantial zinc levels may have implications for eye health (see pages 2-3) as well as processing food and healing wounds. In terms of antioxidants pumpkin power includes Vitamin E and lignans, the chemical compounds found only in plants.

Rated as the best food source of ALA (alpha linoleic acid), beating even walnuts in the Omega 3 league table. But the seed of the flax plant is also one of the richest sources of lignans, the antioxidants that have an anti-inflammatory role. The combination of these two elements have linked linseed with heart and blood health. Some research has also shown positive results in controlling menopausal symptoms like hot flushes. Linseed also has impressive fibre levels as well as copper, manganese, magnesium and vitamin B1.

A series of major research projects have shown that eating just a handful of nuts a day can dramatically reduce the risk of heart disease, cancer, respiratory disease and diabetes and early death. Key nutrients are the unsaturated fats linked to heart health, the antioxidant Vitamin E, folic acid, potassium and fibre. But given that each variety of nut has a unique combination of nutrients all expert opinion is to make your daily intake a mixture. One reason for mixed nuts to rank in our chart.

A portion of three dates not only counts as one of your five a day but comes with vitamins B6, A and K. It is also a great source of potassium, a vital electrolyte. Used by many 21st century chefs as a sweetener in recipes dates contain lots of natural sugars but come low on the glycaemic index and so do not produce sudden spikes in blood sugar levels. Your three dates also have 3g of fibre which is a tenth of that daily target so few of us reach.

Three or four dried apricots (the recommended portion) contains over a quarter of your daily requirement for Vitamin C and almost as much Vitamin A. Both of these are important for eye health (see pages 2 and 3) as well as other vital functions. Those 3 or 4 fruits also contain around a fifth of your daily fibre and usefully it comes split half and half between the soluble and insoluble forms. Then there are substantial levels of potassium as well as iron, zinc, calcium and manganese. And they’re delicious.

A handful of sunflower seeds (around 35gs), contains over 80 per cent of your daily need for Vitamin E, 70 per cent of your copper and over a third of your Vitamin B1, manganese, selenium and phosphorous. Then there is over a quarter of your magnesium and vitamin B6 as well as a fifth of your folate and vitamin B3. That handful also has 7gs of protein and 3gs of fibre. Then there are the fats, predominantly “good” fatty acids including the polyunsaturated linoleic acid (Omega 6) and the monounsaturated, Oleic acid (Omega 9). Both have positive heart benefits.

A delicious addition to a host of stylish recipes prunes are a top source of Vitamin C (well they are dried plums remember) as well as being rated for Vitamin K, copper, potassium and boron, a vital element of bone health. They also contain anti-oxidants called neochlorogenic and chlorogenic acid identified as protecting cell membranes and brain cells. Plus, they have important levels of soluble fibre and sorbitol, a carbohydrate widely used as a sweetener. The combination of these two on the gut may explain why prunes are still recognised for their laxative power.