Ten Things You Should Know About Pecans

Ten Things You Should Know About Pecans 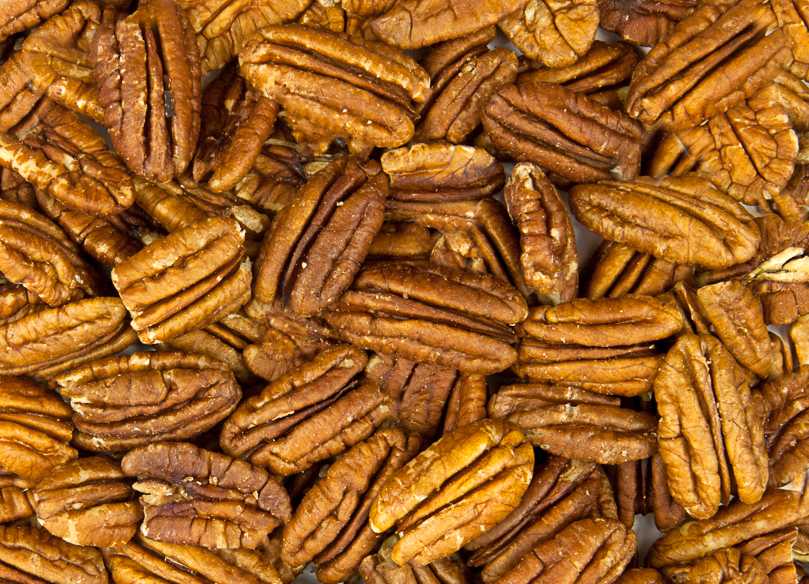 Come the autumn and the Americans not only begin the annual pecan harvest but start looking forward to the traditional pecan pie feasts at Thanksgiving and Christmas. Altogether the US will pick and process more than 135,000 tonnes of pecans, three quarters of them in the southern states of Georgia, New Mexico and Texas. That represents something over 80 per cent of the world total. The Americans are so proud of their pecans that no less than five states include it in their state symbols. Former Texas governor James Hogg requested that a Pecan tree be planted on his grave.

The pecan is a type of hickory and scientifically not a nut at all. It is what botanists call a drupe, a fruit with a single seed surrounded by a husk. The green husk eventually turns brown and drops away leaving the thin-shelled “nut” to be harvested. The pecan tree usually grows to between 70-100 feet but can reach 150 feet. It is a native of the southern US and northern Mexico and the nuts were for centuries an important autumnal food for native peoples. But the commercial growing of the nuts did not start in the US until the 1880s.

A handful of pecans (around 33 g) has over 3g of protein and 3g of fibre (10 per cent of your recommended daily target). It also has six of the B vitamins notably B1 (thiamin) with almost 20 per cent of your daily need. Thiamin helps create energy from food and maintain the nervous system. That handful also has Vitamin E the important antioxidant which actually embraces eight different nutrients. Pecan Vitamin E includes alpha-tocopherol one of the best documented E nutrients in terms of antioxidant effectiveness in protecting cell membranes and maintaining the skin, eyes and immune system.

Pecans have more fat than any other nut. But it is the sort of fat we should be eating. Well over half of it is monounsaturated and over a quarter is polyunsaturated. These are the fats that we are encouraged to switch to because of their positive impact on heart health. Monounsaturated fats can help protect the heart by maintaining levels of “good” HDL cholesterol and reducing the “bad” LDL variety. Polyunsaturated fats can also help lower LDL levels.

There is also benefit in pecans from the presence of three carotenoids, forms of Vitamin A which act as antioxidant and anti-inflammatory agents. They are beta-carotene, lutein and zeaxanthin. In the body beta-carotene is actually converted to Vitamin A which maintains the immune system and is important for vision. Lutein and zeaxanthin are the only carotenoids found in the retina of the human eye and are thought to be important for eye health particularly combatting age-related macular degeneration.

There are over a thousand varieties of pecan and many are named after native American tribes including cheyenne, mohawk, sioux and Choctaw. Different varieties produce different size nuts which is one of the reasons the US pecan business trades in nuts of six different sizes ranging from extra small to mammoth. Albany, Georgia which is surrounded by 600,000 pecan trees is the pecan capital of the US and hosts the annual National Pecan Festival which includes the crowning of the National Pecan Queen.

In culinary terms pecans are, of course, best known as the centrepiece of the Pecan Pie (a recipe appeared in our winter edition last year). For non-Americans it may seem amazingly sweet but there are endless variations some involving bourbon or rum. But the pecan features in hundreds of US recipes. In its 75th anniversary cookbook the National Pecan Shellers Association lists recipes for everything from soups and salads to pizza, and pancakes. They also include chopped pecan coatings for fish and meat as well as beef and pecan meatballs plus a cocktail called the Pecan Vodka Mississippi Mule.

On this side of the Atlantic the BBC alone lists 78 pecan recipes embracing cakes, nut loaves, chocolate pecan brownies, butternut and pecan pasties as well as both a Christmas cake and a Christmas pudding. There are thousands of recipes from elsewhere for pecan bread, muffins, cookies, biscuits and cakes. The first recipe Deliciously Ella ever posted on her blog was for raw brownies involving pecans, dates and cacao powder simply whizzed together in a food processor. More recently posted on Instagram it has 17,650 likes.

It is said to be possible to grow your own pecans in the UK despite our freezing winters. Baby trees are available online for under £10. A 3-4 metre tree costs £365 but comes with the warning that the pecan or carya illinoinensis as it is scientifically known does reach a height of over 20 metres and with its broad spread is unsuitable for anything but the largest garden. It is recommended for parkland. And it will not produce nuts every year. So probably best to leave it to the Americans.