Ten Things You Should Know About Cashew Nuts

Ten Things You Should Know About Cashew Nuts 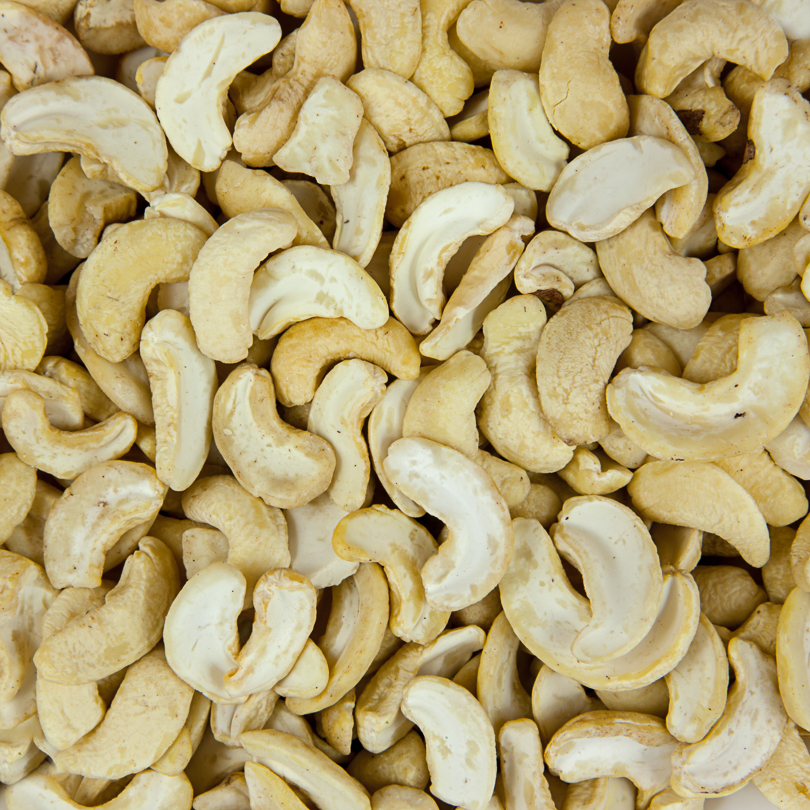 The cashew story begins normally enough. The tropical evergreen tree bursts into blossom and each pink and white bloom begins to produce a kidney shaped seed, called a drupe. Then it becomes odd. Because above each drupe develops a large, swelling fruit which turns from green to red. So, each tree appears to be bearing a large crop of apples each with a small attachment. When the crop ripens and is harvested it is only this “hook” on the bottom that is of interest to nut eaters.

But each drupe has first to be detached from its “apple”, then freed from its hard, double shell. This cashew cracking is normally done by female workers using workbench splitters to free the kernels one at a time after they have been heat treated to make the process easier. Each nut then has to be peeled of its dark skin, again by hand. Only then does the cashew emerge as a delicious food packed with quality fats, vitamins, protein, fibre and an extraordinary array of minerals.

A handful of cashews (around 40g) contains 70 per cent of an adult’s daily recommended intake of copper which is vital for producing red and white blood cells and helping form haemoglobin which carries oxygen around the body. Copper is also linked to the immune system and bone maintenance. That handful of nuts also contains around half an adult's daily need for phosphorous which helps build healthy bones and teeth as well as helping turn the food we eat into energy. But the mineral story does not end there.

That 40g serving also delivers around a third of the adult requirement for magnesium which helps with energy production and bone health. Then there are important levels of zinc for making new cells and wound healing; manganese which helps activate enzymes in the body; potassium which has a role to play in the balance of fluids and maintaining the muscles of the heart; selenium which is key to the immune system and cell structure and iron, critical for making red blood cells.

Cashews are one of the protein sources recommended by the Vegan Society. That handful of nuts has 7g of protein, around 15% of an adult daily recommended intake. It also has a whole range of B vitamins including B1, B5 and B6 which help create, use and store energy from the food we eat and folate which helps the formation of red blood cells and is critical for the development of babies in the womb. Plus, they contain the antioxidant Vitamin E and important levels of Vitamin K which is vital in blood clotting.

Not only do cashews have a lower fat content than many other nuts most of what they do have is the good sort. Well over half is heart healthy monounsaturated fat as found in olive oil. It is the presence of quality fats that is believed to be one of the reasons why nuts in general have such an extraordinary record of fighting heart disease. A series of research projects over the past 30 years have shown that regular nut eaters cut their risk of coronary heart disease by as much as 20 per cent.

Known to botanists as Anacardium Occidentale the Cashew Tree is a relative of the mango and pistachio. It has its origins in Brazil but was taken by the Portuguese to India in the 16th century and has since spread in plantations across south east Asia and Africa. Global production levels have now topped four million tonnes with Vietnam the leading grower followed by India, Cote D’Ivoire and the Philippines. Growers are switching the towering traditional tree (up to 14m high) with a much smaller version that comes more quickly into production and bears higher yields.

In India and Pakistan cashews are traditionally an everyday ingredient in a range of recipes including curries, particularly kormas. They are also regulars in stir fries and noodle dishes across Asia. But in the 21st century they have become part of the global cooking culture particularly in vegetarian and vegan dishes. Many recipes marry cashews with chicken or prawns; others combine them with vegetables or feature them in salads. They are baked in cakes as well as being part of the mix for pancakes, smoothies, granolas and veggie burgers.

Part of cashew culinary magic is how quickly they can be turned into sauces, cashew milk, cashew cream and even cheese. Simply soaked for a few hours in water they can be blitzed in minutes into a delicious non-dairy cream either with or without a sweetener (maple syrup or raisins for example.) Simply adding more water to the blender, the cream can be turned into milk. The basic cream can be mixed with either yoghurt (and allowed to ferment) or lemon juice to become sour cream. This can then be used to make cashew mozzarella cheese.

In many parts of the world that cashew “apple” to which the nut is attached is simply discarded. But not everywhere. Despite its bitter taste in South America the apple juice is used to flavour drinks. In Goa the juice is fermented and then distilled to create a highly alcoholic tipple called fenny. Those double skinned hard shells from around the nut contain a toxic resin but find a range of industrial uses including in paints, lubricants and water proofing materials. So nutritious and delicious it may be but on the outside a cashew is also one tough nut.