Ten Things You Should Know About Brazil Nuts

Ten Things You Should Know About Brazil Nuts 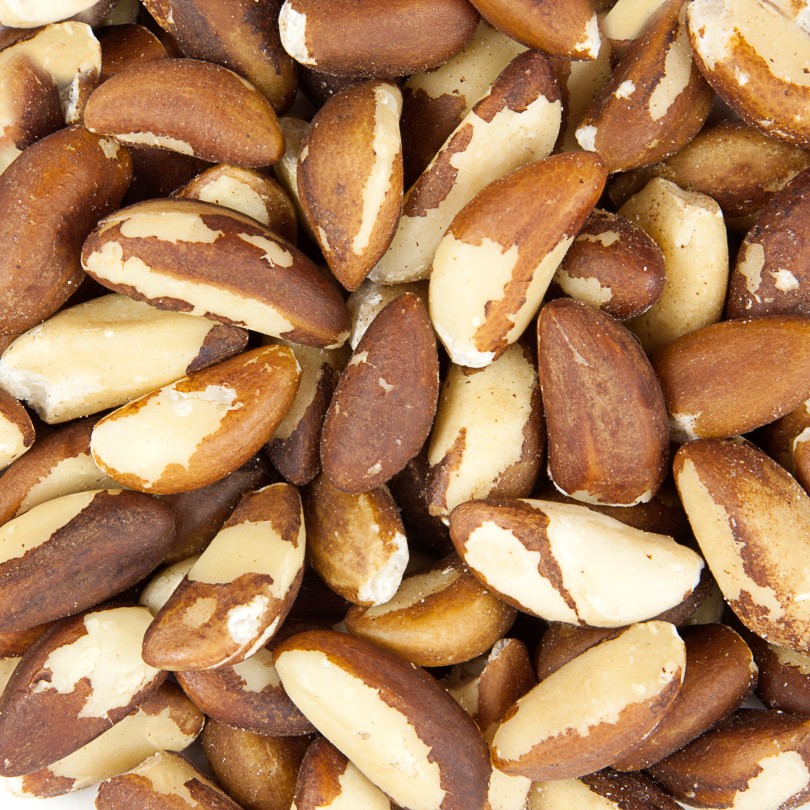 Brazil nuts are one of the very few foods that reach a global market but are still collected by hand from the wild. The tree that produces the nuts (Bertholletia excelsa) is a native of the Amazon rain forest and has, so far, resisted attempts to cultivate it in plantations. It grows naturally across the Amazon’s two million square miles of rain forest which stretches over eight countries. Concentrated in groups of twenty or thirty the trees tower to a height of 50m (160') or more and only begin producing nuts after twelve years.

The trees blossoming reaches a peak between October and December and the fruit takes 14 months to mature. The nuts are contained in a thick woody outer shell that looks like a coconut, weighs around two kilograms and so poses a real danger to anyone underneath when it ripens and falls. Inside are up to two dozen nuts packed like the segments of an orange.

The harvest is collected by teams who move into the jungle and live in makeshift huts. It is said that on a good day one-man can collect a thousand pods, chop the end of each with a machete and remove the nuts. They then have to be carried to the nearest river or road from where they can be sold to intermediaries who shell them and move them into the world market. Brazils are seen as a prime example of taking a product from the rainforest while creating no environmental damage. But the future is clouded.

In Brazil, Peru and Bolivia felling brazil nut trees is illegal but the felling of other timber can blight the crop. Critical to the pollination process are varieties of large bees which have the size and power to force their way into the curved blooms. But they are only present in pristine forest. As is a small rodent called the agouti (see picture above right). It eats brazil nut and buries some for future use like a squirrel. Those it forgets grow and are critical to the future of the brazil nut supply.

We British are the world’s leading consumers of Brazil nuts. We import around 7,000 tonnes a year. Ironically Brazil is not the world’s leading producer. It is second to Bolivia on a list that includes Venezuela, Columbia and Peru. While the nuts have been eaten in the Amazon for thousands of years no South American country now makes into the world’s top twenty consumers. Spanish explorers were the first Europeans to encounter Brazil nuts they were first brought back to Europe in the 15th century by the Dutch.

Brazils are packed with monounsaturated fats which are linked to lowering cholesterol levels and protecting heart health. In a large handful of nuts (6-9 kernels, 25g) almost half of the weight is made up of monounsaturated and polyunsaturated fats. It also contains 3.5g of protein and almost as much carbohydrates. There is almost 2g of fibre plus 10 per cent or more of our daily need for Vitamin E the important antioxidant that helps maintain healthy skin and eyes and strengthen the immune system. Brazils also deliver Thiamine (B1) which helps release energy from food and maintain the nervous system, B6 and folate (see page 4). They are also rich in minerals.

That handful of nuts has around a quarter of our daily requirement for magnesium and copper. Magnesium is necessary for a range of chemical reactions in the body including those affecting bone health, maintaining the nervous system and controlling inflammation. Copper has key antioxidant functions, is required for the manufacture of collagen and helps incorporate iron into red blood cells. The mineral list also includes manganese, phosphorous zinc, calcium and potassium. And then there’s selenium.

Brazils are recognised as the best food source on the planet for the trace element selenium which plays a vital antioxidant role by helping activate protective enzymes. It is also needed in the operation of the thyroid gland and in maintaining a healthy immune system. Just one or two nuts will provide the recommended daily adult intake of selenium which is 75 micrograms for an adult male and 60g for a female. And of course, eating nuts on a regular basis has repeatedly been shown to dramatically reduce the risk of coronary heart disease and early death.

After decades of being celebrated as a tasty snack Brazils have blossomed into an established health food and plant-based cooking ingredient. As well as being a regular in muesli recipes they crop up in cookies and cakes (including the stained-glass window one in our winter edition), in roasts, in vegetable dishes (like charred sprouts and toasted brazils) in salads, in burgers, protein balls and brownies. And top Australian chef Donna Hay even has a Brazil Nut Pie which involves 240g of chopped nuts cooked in a pastry case made with another 160g of ground Brazils.

Have you ever noticed that if a container of mixed nuts is moved around a lot the Brazils work their way to the top? This is not just a freakish nut thing it is the result of a scientific phenomenon known as the Brazil Nut Effect. It occurs in any collection of mixed size particles as the larger ones rise up through the middle and the small ones slide down to fill in the spaces left behind. This granular convection has significance for manufacturing processes and even avalanche modelling. But for nut lovers its major significance is that we get to eat the brazils first.