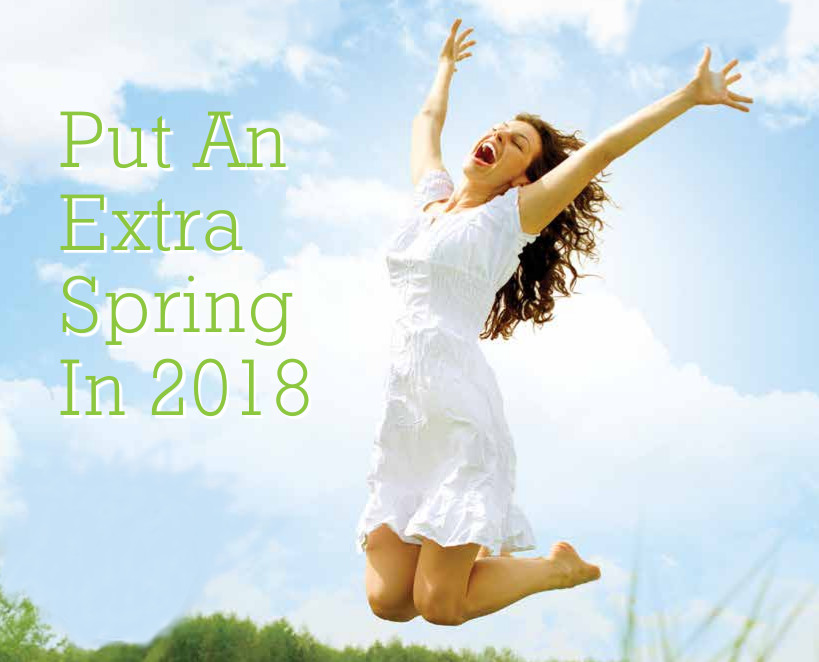 Is the prospect of a new Spring leaving you feeling a little short of blooming energy? Then perhaps it is time to put some extra get-up-and-go in your diet. And not just a quick sugary fix. But a long term, slow release process that means a sustainable raised energy level.

There are just four ways of putting energy into our bodies...carbohydrates, fat, protein and alcohol. It is suggested that carbohydrates should make up just over a third of everything we eat. All carbs are converted to glucose to energise muscles and organs.

But we need to avoid sudden energy spikes followed by deadening slumps. So, the key is to ditch carbs that release sugar quickly and to focus on the slow burn starchy foods. And choose whole grain options with more nutrients and extra fibre. Proteins replace and repair body cells. Guidelines are to take in 75g of protein for every kilo of bodyweight. So, if you weigh 70K (11 stones) you need 52.5g a day.

Many plant-based foods have protein levels to match those in meat, fish and dairy and, of course, they avoid those bad fats. Guidelines say no more than ten per cent of our energy intake should come from saturated fats (essentially those from animal sources). Unsaturated fats (mostly from plant sources) can make up another twenty per cent. We should target the heart healthy Omega 3 fatty acids.

In its Energy Diet the NHS has six key pieces of advice: eat at regular intervals, eat breakfast, eat less sugar, eat five a day, eat enough and drink more. Of course, it advises caution with the alcohol but suggests drinking 6-8 glasses of fluids a day.

Specific targets for boosting energy include iron and magnesium. Large numbers of us, women in particular, have deficiencies of both of these minerals which play important roles in keeping us energised. So, do the B vitamins. B2 (riboflavin) and B3 (niacin) are vital in making glucose available to cells. Other Bs are also involved in the energy process. So where do we find the key ingredients to create the 2018 energy surge?

To help here's our guide to the top energy foods at Grape Tree.

Oats are such an energy packed way to start the day they are recommended for breakfast by health experts and bodybuilders alike. A quarter cup (23g) has 6g of protein and a thumping 25g of carbs. It also has B1, fibre and a sixth of your daily magnesium need. It is a pattern similar with all wholegrains but the one that seems to have it all (including all seven amino acids) is quinoa (see page 9). All whole grains including millet, buckwheat, bulgur and teff also offer a longer life. Research has shown whole grain consumers cut their risk of death over a 25 year period by 15 per cent.

Nuts are packed with the proteins, carbohydrates and fats that make them a top energy food. Plus they have a selection of those vital B vitamins. A quarter cup of almonds, that's a handful, has 5g of protein, 5g of carbs and 3g of fibre plus about a fifth of your daily B2 requirement. That quantity of walnuts has 4.5g of protein, 4g of carbs, 2g of fibre as well as calcium, iron, zinc and B6. Plus, walnuts are a super source of Omega 3. A handful of cashews has a quarter of your daily magnesium requirement plus 7g of protein, 12g of carbs plus fibre, B1 and B6. Research shows that regular nut consumption cut their risk of heart disease, cancer and stroke.

A pulse is an edible seed that grows in a pod. So that includes beans, peas and lentils. The Grape Tree lentil range includes black, green, red and speckled. One cup of lentils (around 198g) contain 17g of protein as well as 15g of fibre which is half an adult's daily need. Plus, it has 90 per cent of your daily folate requirement and notable quantities of B1, B2, B3, B6. It also has almost a fifth of your daily magnesium requirement as well as iron, copper, potassium and zinc. Lentils have virtually no fat. And, like all pulses, they count as one of your 5 a day.

Both chia and pumpkin seeds are recommended sources of alpha linolenic acid, the plant-based form of Omega 3. They also have iron and large amounts of magnesium. A handful of pumpkin seeds also contains a fifth of your daily protein. A serving of chia, that's around 28g or 2tbs has a third of our daily fibre requirement and 10 per cent of our protein for the day. It is also gluten and cholesterol free. An equivalent handful of sunflower seeds has 7g of protein and substantial source of magnesium and four of those B vitamins  B1, B6, B3 and folate.