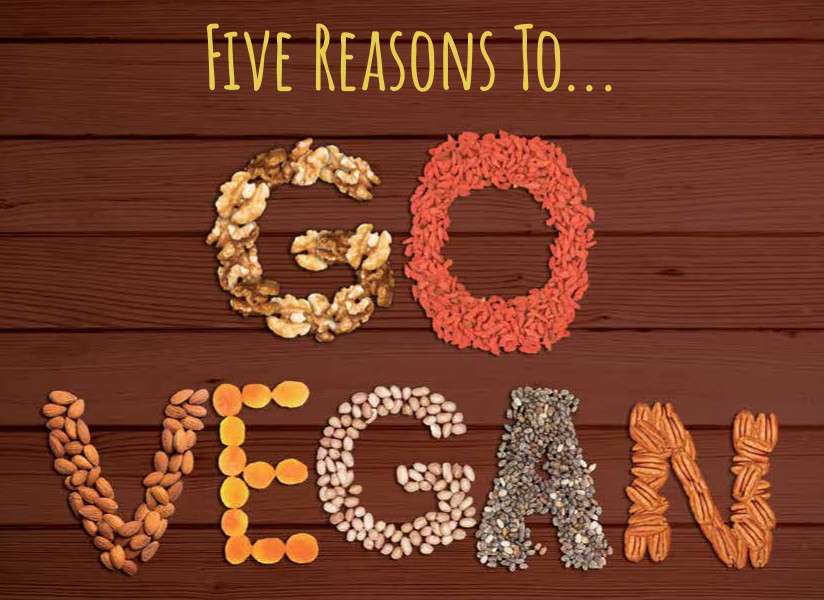 FIVE REASONS YOU MIGHT GO VEGAN FOR THE 2020’s

In 2019 a quarter of a million people from around the globe took the Veganuary pledge to try a month of veganism and almost half of them say they will stay vegan.

So, it seems certain that the opening of not just a new year, but the new 2020s decade will make a truly major impact on the plant-based eating boom in the UK.

According to the Vegan Society there are now over 600,000 vegans in this country, just over 1 per cent of the population. Other sources say the figure is nearer 3 per cent. The numbers have quadrupled in the last five years, but they only tell a small part of the move away from meat.

One research project showed that one in eight Brits is now vegan or vegetarian and a further 21 per cent of the population is flexitarian.

To take a trial of the full vegan experience yourself there are two ways to go. You can contact Veganuary, the British based charity launched six years ago (veganuary.com). Or the Vegan Society which has just celebrated its 75th birthday (vegansociety.com). Both offer the chance to sign up to a month-long trial with full support in terms of nutrition, meal plans, advice and recipes.

To help with your decision here are five reasons for going vegan:

In Veganuary 2019 health was the number one reason for people taking the pledge. The key health advantages include reducing your intake of saturated fats and a consequential reduction in the risk of heart disease and some cancers. Studies among those in excellent health show that, overall, vegans live as long as meat eaters. Certainly, the vegan diet centres on foods associated with healthier and longer lives. Within recent months a major study said that in the UK 90,000 people a year are dying prematurely as a result of a poor diet and identified failing to eat enough wholegrains, fruit, nuts and seeds as the most critical factors.

The welfare of animals is a major reason for the non-stop progress of veganism. Vegans argue that eating meat and dairy products supports an agricultural industry in which millions of creatures live in unnatural, stressful and even downright cruel conditions. They cite dairy cows being separated from their offspring at birth and male calves being slaughtered. They point to the fact that the majority of the 900 million chickens slaughtered in the UK each year are packed into “factory” farms and never see the light of day. That even many so-called free-range laying hens are kept in multi-tier buildings with tens of thousands under one roof and many never going out.

Not eating meat and dairy products is the single biggest way to reduce your environmental impact on the planet, researchers have said. This is because farming animals requires massively more land and resources than growing and eating plants. It takes ten times more grain to produce the food calories in beef than if we simply eat the grain. The demand for ever more agricultural land is leading to the destruction of jungle environments around the globe and the threat of extinction for hundreds of species like the orangutan. The losses in the Amazon are the size of a football pitch every second. In Brazil over five million acres are used to grow soya to feed animals in Europe. Farm animals also account for around 15 per cent of greenhouse gas emissions.

The world is facing a freshwater crisis. According to the United Nations by the end of the Twenties we will have less than 60 per cent of the water we need. Yet it takes three times less water to feed a vegan than it does a meat eater. That’s because while it takes as much as 15,000 litres to produce a kilo of beef it takes less than 300 litres for 1kg of potatoes. A kilo of butter requires over 5,000 litres but growing an apple needs just over 800 litres. Farming uses around 70 per cent of the globe’s accessible fresh water, compared to 20 per cent for industry and 10 per cent for domestic use. Agriculture is also a major polluter of rivers and sea water.

Over half of those who decided to stay vegan after last year’s Veganuary said their decision was influenced by the discovery of great new foods. To get a taste of just how delicious the vegan way of life can be just take a look on the facing page. But turning vegan also means being more aware of what you eat and its impact on your well-being. “It is likely” says Veganuary “that you will be better informed about your body and what it needs to function than ever before. This is something to be excited by not scared of. Welcome to the world of health, vitality and fun”.

FOODS THAT CAN MAKE IT HAPPEN

With good planning and understanding of what makes up a healthy, balanced vegan diet you can get all the nutrients your body needs. So says the NHS in its guide to vegan eating. But it points out a handful of nutrients that require special attention. They include Vitamin D, for which our chief source is sunlight on the skin. In winter everyone is recommended to consider taking a supplement. The others are:

Calcium which is vital for building bones and teeth. Adults need 700mg a day. Most green vegetables (but not spinach) and fortified foods are key sources. A handful of almonds (around 30g) has 88mg. A similar quantity of apricots and figs both have 18mg, raisins have 17mg and prunes 14mg. All are sources recommended by the NHS.

Vitamin B12 helps make red blood cells and maintain the nervous system but it is not produced by plants. Adults need 1.5 micrograms a day. Those who do not eat meat or dairy need to look to supplements or fortified foods. The Vegan Society also recommends fortified yeast extracts and nutritional yeast flakes. The Society suggests one dish every day with 5g of them. A 5g serving of Grape Tree own brand Yeast Flakes will deliver 2.2mcg of B12 more than your requirement for the day. It also has the other seven B vitamins, 2.45g of protein, 1.25g of fibre plus calcium, zinc, iron, selenium, potassium, phosphorous, magnesium and copper.

Omega 3 fatty acids are needed for the functioning of the brain and the control of heart disease and stroke. This has led to advice to eat at least two portions a week of oily fish which contains the Omega 3s EPA (eicosapentaenoic acid) and DHA (docosahexaenoic acid). The third major Omega 3 is alpha-linoleic acid (ALA) and this is the one the body cannot make. For non-fish eaters ALA is critical because it can help create EPA and DHA. Linseed and walnuts are rated as excellent sources of Omega 3s. Chia seeds, linseed and hemp seeds are also recommended.